Join us for a very special mixer this month featuring some of the founders of our organization as well as those who have been a part of the fight for equality in the Republican Party.

Our theme is "Log Cabin Republicans - Who we are, where we came from and where we are going." To answer these questions, we've assembled an amazing line-up of speakers. Some are from the past and some from the present, but they all are vital parts of Log Cabin both locally and nationally... CLICK HERE FOR MORE DETAILS AND TO RSVP!

Posted by NationBuilder Support February 24, 2016 7:53 AM
Share
Add your reaction

As election year heats up, we've invited two speakers for the Presidential and Senatorial elections!

Discussing the Presidential election will be Gary Aminoff, the LA County Co-Chair of the Ted Cruz campaign. .He'll be there making the case for a Ted Cruz led White House and to answer tough questions from our members on why they should support him. Stay tuned for more details and guest speakers as well!

Candidate for US Senate Thomas Del Becarro will also be on hand to... READ MORE

Posted by NationBuilder Support November 28, 2015 10:59 AM
Share
Add your reaction

You won't want to miss our Holiday Party on Sunday, December 13th at Sur Lounge in West Hollywood. We'll have food, drinks and even a visit from hunky Santa and the beautiful Mrs. Claus!

Click here for all the details and to RSVP!

Last fall, Log Cabin members walked the precincts and donated time and money to help David beat out his opponent Al Muratuschi and break the Democrat supermajority in the State Assembly. With the legislature adjourned until January, David will update us on the activities of the 2015 session. He’ll tell us...

We will also be collecting hotel and trial size toiletries for LGBT Homeless Youth as we head in to the holidays.

in a near-unanimous vote, the Republican Party of California struck anti-gay language from its Party platform and added language supporting non-discrimination legislation for individuals based on sexual orientation because of the work of Log Cabin Republicans of California.

It's Not Just the GOP Fighting for Its Antigay 'Religious Freedom'

Our Chapter President Matthew Craffey  recently penned an op-ed piece for LGBT publication "The Advocate" regarding the Kim Davis case and the battle over "religious freedom":

The behavior of Republican politicians is nothing if not predictable. But what is surprising is that this battle is exposing elected Democrats who can no longer simply stay indifferent on this issue or hide behind Obama’s record as they are now compelled to carry out the law. To put it more bluntly, shit just got real.

Davis is in fact a Democrat. The Democratic candidate for Kentucky governor supports her actions and has actually said he wants to pass a law protecting county clerks from having to issue marriage licenses to same-sex couples if they have religious objections. The federal judge who sent Davis to jail for not carrying out her duties was an appointee of Republican President George W. Bush. In fact, the entire “religious freedom” protections idea stemmed from the bill President Bill Clinton signed into law in 1993. As an Illinois state senator in 1998, Obama also voted in favor of a version of a similar bill. Meanwhile, Hillary Clinton has famously supported states’ rights on the issue of marriage, which would ostensibly allow “religious freedom” laws to be used to deny same-sex couples the ability to marry.

Click here to read the entire article at The Advocate!

This year's Log Cabin LA Pool Party is going to be RED HOT!

Posted by NationBuilder Support June 26, 2015 8:49 AM
Share
Add your reaction

Moments ago, the Supreme Court of the United States issued its landmark ruling in Obergefell v. Hodges. In its 5-4 opinion, the court ruled that there is a constitutional right to marriage equality in all 50 states.

“Today the Supreme Court of the United States finally recognized what Log Cabin Republicans has long advocated for: the constitutional right of committed same-sex couples to engage in civil marriage partnerships,” Log Cabin Republicans National Executive Director Gregory T. Angelo stated. “At hand lies a tremendous opportunity for healing on all sides: Log Cabin Republicans encourages marriage equality advocates to resist the temptation of being ‘sore winners’ and respecting others who may not yet be at a place of acceptance; and opponents of marriage equality who can light a way out of the LGBT culture wars by recognizing that civil marriage for committed same-sex couples is no threat to any straight couple’s marriage, family, or faith. This is a watershed moment for the LGBT rights movement — one that had its genesis on the center-right — and Log Cabin Republicans congratulates our allied organizations, grassroots Chapter Leaders, and — especially — those committed same-sex couples who moved national sentiment on marriage equality so far, so fast simply by living their lives in quiet dignity.”

In providing the Opinion of the Court, Justice Kennedy wrote:

"No union is more profound than marriage, for it embodies the highest ideals of love, fidelity, devotion, sacrifice, and family. In forming a marital union, two people become something greater than once they were. As some of the petitioners in these cases demonstrate, marriage embodies a love that may endure even past death. It would misunderstand these men and women to say they disrespect the idea of marriage. Their plea is that they do respect it, respect it so deeply that they seek to find its fulfillment for themselves. Their hope is not to be condemned to live in loneliness, excluded from one of civilization’s oldest institutions. They ask for equal dignity in the eyes of the law. The Constitution grants them that right." 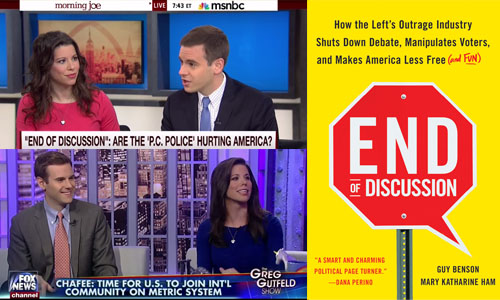 You've probably seen them on FOX News, MSNBC, heard them on the radio or read their online articles at sites like Townhall, Hot Air, Breitbart, The Daily Caller, The Weekly Standard and more.

Now Guy Benson and Mary Katharine Ham will be joining us for a special event at V Wine Room in West Hollywood to discuss their new book "End of Discussion: How the Left's Outrage Industry Shuts Down Debate, Manipulates Voters, and Makes America Less Free (AND FUN)!"  Ahead of the May publication, Guy came out as gay by announcing the book would include a footnote saying simply, "Guy here. So I'm gay."